One of the key gaps in Rust’s ecosystem has been a strong story for fast and productive asynchronous I/O. We have solid foundations, like the mio library, but they’re very low level: you have to wire up state machines and juggle callbacks directly.

We’ve wanted something higher level, with better ergonomics, but also better composability, supporting an ecosystem of asynchronous abstractions that all work together. This story might sound familiar: it’s the same goal that’s led to the introduction of futures (aka promises) in many languages, with some supporting async/await sugar on top.

A major tenet of Rust is the ability to build zero-cost abstractions, and that leads to one additional goal for our async I/O story: ideally, an abstraction like futures should compile down to something equivalent to the state-machine-and-callback-juggling code we’re writing today (with no additional runtime overhead).

Over the past couple of months, Alex Crichton and I have developed a zero-cost futures library for Rust, one that we believe achieves these goals. (Thanks to Carl Lerche, Yehuda Katz, and Nicholas Matsakis for insights along the way.)

Today, we’re excited to kick off a blog series about the new library. This post gives the highlights, a few key ideas, and some preliminary benchmarks. Follow-up posts will showcase how Rust’s features come together in the design of this zero-cost abstraction. And there’s already a tutorial to get you going.

Before delving into futures, it’ll be helpful to talk a bit about the past.

Let’s start with a simple piece of I/O you might want to perform: reading a certain number of bytes from a socket. Rust provides a function, read_exact, to do this:

Quick quiz: what happens if we haven’t received enough bytes from the socket yet?

In today’s Rust, the answer is that the current thread blocks, sleeping until more bytes are available. But that wasn’t always the case.

Early on, Rust had a “green threading” model, not unlike Go’s. You could spin up a large number of lightweight tasks, which were then scheduled onto real OS threads (sometimes called “M:N threading”). In the green threading model, a function like read_exact blocks the current task, but not the underlying OS thread; instead, the task scheduler switches to another task. That’s great, because you can scale up to a very large number of tasks, most of which are blocked, while using only a small number of OS threads.

The problem is that green threads were at odds with Rust’s ambitions to be a true C replacement, with no imposed runtime system or FFI costs: we were unable to find an implementation strategy that didn’t impose serious global costs. You can read more in the RFC that removed green threading.

So if we want to handle a large number of simultaneous connections, many of which are waiting for I/O, but we want to keep the number of OS threads to a minimum, what else can we do?

Asynchronous I/O is the answer – and in fact, it’s used to implement green threading as well.

In a nutshell, with async I/O you can attempt an I/O operation without blocking. If it can’t complete immediately, you can retry at some later point. To make this work, the OS provides tools like epoll, allowing you to query which of a large set of I/O objects are ready for reading or writing – which is essentially the API that mio provides.

The problem is that there’s a lot of painful work tracking all of the I/O events you’re interested in, and dispatching those to the right callbacks (not to mention programming in a purely callback-driven way). That’s one of the key problems that futures solve.

So what is a future?

In essence, a future represents a value that might not be ready yet. Usually, the future becomes complete (the value is ready) due to an event happening somewhere else. While we’ve been looking at this from the perspective of basic I/O, you can use a future to represent a wide range of events, e.g.:

And so on. The point is that futures are applicable to asynchronous events of all shapes and sizes. The asynchrony is reflected in the fact that you get a future right away, without blocking, even though the value the future represents will become ready only at some unknown time in the… future.

In Rust, we represent futures as a trait (i.e., an interface), roughly:

The Item type says what kind of value the future will yield once it’s complete.

Going back to our earlier list of examples, we can write several functions producing different futures (using impl syntax):

All of these functions will return their future immediately, whether or not the event the future represents is complete; the functions are non-blocking.

Things really start getting interesting with futures when you combine them. There are endless ways of doing so, e.g.:

See this code for a more fleshed out example.

This is non-blocking code that moves through several states: first we do an RPC call to acquire an ID; then we look up the corresponding row; then we encode it to json; then we write it to a socket. Under the hood, this code will compile down to an actual state machine which progresses via callbacks (with no overhead), but we get to write it in a style that’s not far from simple blocking code. (Rustaceans will note that this story is very similar to Iterator in the standard library.) Ergonomic, high-level code that compiles to state-machine-and-callbacks: that’s what we were after!

It’s also worth considering that each of the futures being used here might come from a different library. The futures abstraction allows them to all be combined seamlessly together.

But wait – there’s more! As you keep pushing on the future “combinators”, you’re able to not just reach parity with simple blocking code, but to do things that can be tricky or painful to write otherwise. To see an example, we’ll need one more concept: streams.

Futures are all about a single value that will eventually be produced, but many event sources naturally produce a stream of values over time. For example, incoming TCP connections or incoming requests on a socket are both naturally streams.

The futures library includes a Stream trait as well, which is very similar to futures, but set up to produce a sequence of values over time. It has a set of combinators, some of which work with futures. For example, if s is a stream, you can write:

This code will give you a new stream that works by first pulling a value val from s, then computing some_future(val) from it, then executing that future and yielding its value – then doing it all over again to produce the next value in the stream.

Here, we’ve written the core of a simple server by operating on streams. It’s not rocket science, but it is a bit exciting to be manipulating values like responses that represent the entirety of what the server is producing.

Let’s make things more interesting. Assume the protocol is pipelined, i.e., that the client can send additional requests on the socket before hearing back from the ones being processed. We want to actually process the requests sequentially, but there’s an opportunity for some parallelism here: we could read and parse a few requests ahead, while the current request is being processed. Doing so is as easy as inserting one more combinator in the right place:

The buffered combinator takes a stream of futures and buffers it by some fixed amount. Buffering the stream means that it will eagerly pull out more than the requested number of items, and stash the resulting futures in a buffer for later processing. In this case, that means that we will read and parse up to 32 extra requests in parallel, while running process on the current one.

These are relatively simple examples of using futures and streams, but hopefully they convey some sense of how the combinators can empower you to do very high-level async programming.

I’ve claimed a few times that our futures library provides a zero-cost abstraction, in that it compiles to something very close to the state machine code you’d write by hand. To make that a bit more concrete:

And so on. Later blog posts will get into the details of these claims and show how we leverage Rust to get to zero cost.

But the proof is in the pudding. We wrote a simple HTTP server framework, minihttp, which supports pipelining and TLS. This server uses futures at every level of its implementation, from reading bytes off a socket to processing streams of requests. Besides being a pleasant way to write the server, this provides a pretty strong stress test for the overhead of the futures abstraction.

To get a basic assessment of that overhead, we then implemented the TechEmpower “plaintext” benchmark. This microbenchmark tests a “hello world” HTTP server by throwing a huge number of concurrent and pipelined requests at it. Since the “work” that the server is doing to process the requests is trivial, the performance is largely a reflection of the basic overhead of the server framework (and in our case, the futures framework).

TechEmpower is used to compare a very large number of web frameworks across many different languages. We compared minihttp to a few of the top contenders:

Here are the results, in number of “Hello world!”s served per second on an 8 core Linux machine: 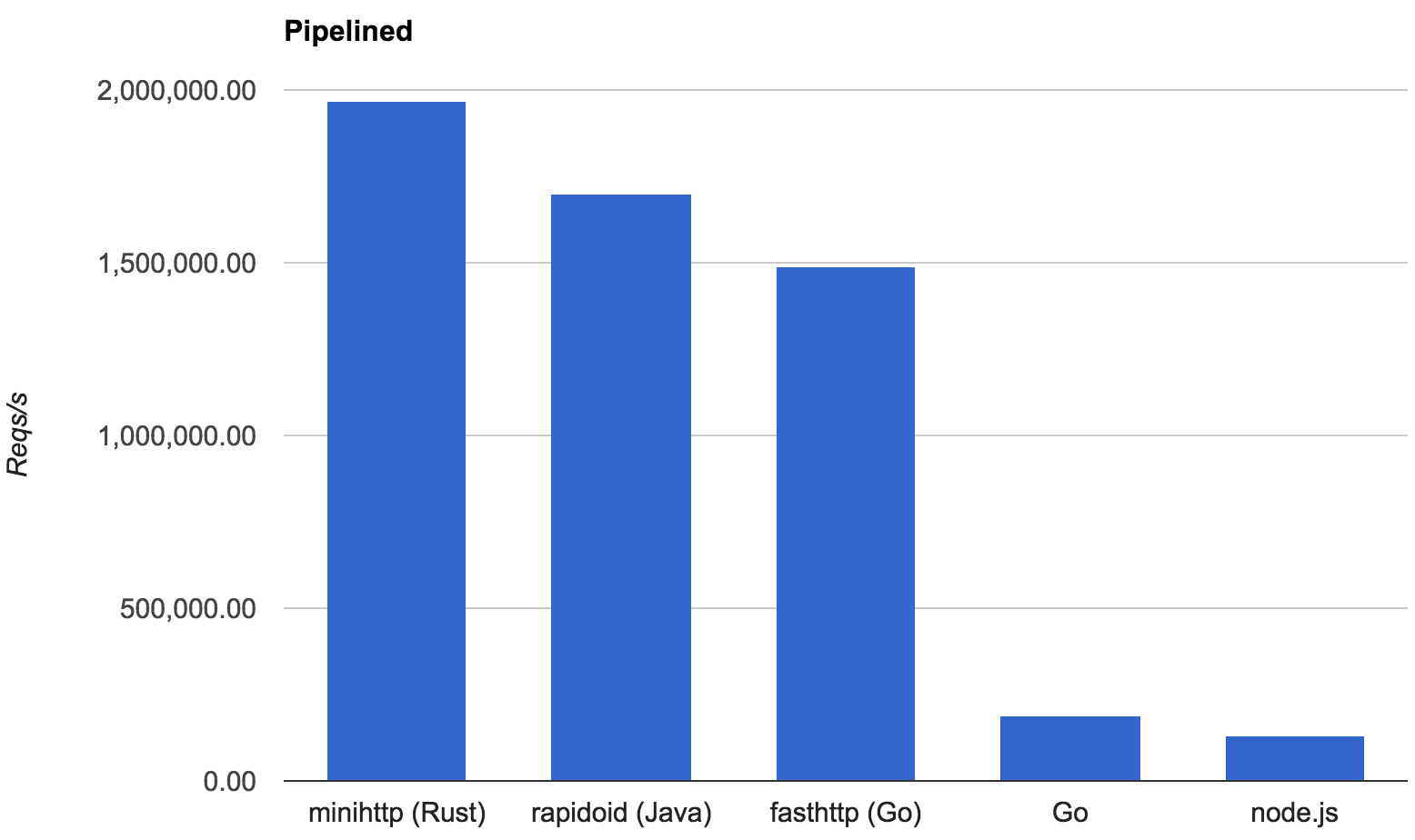 It seems safe to say that futures are not imposing significant overhead.

Update: to provide some extra evidence, we’ve added a comparison of minihttp against a directly-coded state machine version in Rust (see “raw mio” in the link). The two are within 0.3% of each other.

Thus concludes our whirlwind introduction to zero-cost futures in Rust. We’ll see more details about the design in the posts to come.

At this point, the library is quite usable, and pretty thoroughly documented; it comes with a tutorial and plenty of examples, including:

as well as a variety of integrations, e.g. a futures-based interface to curl. We’re actively working with several people in the Rust community to integrate with their work; if you’re interested, please reach out to Alex or myself!

If you want to do low-level I/O programming with futures, you can use futures-mio to do so on top of mio. We think this is an exciting direction to take async I/O programming in general in Rust, and follow up posts will go into more detail on the mechanics.

Alternatively, if you just want to speak HTTP, you can work on top of minihttp by providing a service: a function that takes an HTTP request, and returns a future of an HTTP response. This kind of RPC/service abstraction opens the door to writing a lot of reusable “middleware” for servers, and has gotten a lot of traction in Twitter’s Finagle library for Scala; it’s also being used in Facebook’s Wangle library. In the Rust world, there’s already a library called Tokio in the works that builds a general service abstraction on our futures library, and could serve a role similar to Finagle.

There’s an enormous amount of work ahead:

Whatever your interests might be, we’d love to hear from you – we’re acrichto and aturon on Rust’s IRC channels. Come say hi!